Ralph always made it quite clear that Gang Show was part of the Scout Movement and that the Movement was not part of Gang Show. He devoted his genius and services to the Movement not only in this country but world wide. He never collected any expenses or royalties on any of this material. Needless to say all this great work that he did, at much financial cost to himself, he did for the love of scouting and all that it stands for. A well loved song of his “I wouldn’t change for a man with a million” sums it up for Ralph who was a living legend in his own lifetime – Broadway and West End Star – Creator of Gang Show – Scouter – R.A.F. Officer – Chief Scout’s Commissioner – C.B.E. – Man among men and so much more.

Ken Krelle, writing as President of LGSF in 1992

Diamond Jubilee Celebration issue of “These are the Times”

….The story of a trickle of Holborn Rovers in a one-night stand at the London Central Y.M.C.A., turning into a flood-tide of hitherto unheard-of success, storming the citadel of the London Palladium and being honoured by a Royal Command Performance. It is the story of faith, enthusiasm and loyalty which spread across the world, conquering radio, television, gramophone recordings and a feature film. It put a new word into Scouting and that word was “Gang”. It revolutionised Scout entertainments.

Tonight we gather to celebrate 75 glorious years of fun, friendship and laughter for all those who have been associated with “Gang Show”. Sadly there are very few London Gang Show members with us now who hold those fond memories of the pre war years at the Scala Theatre, London, and of the 1937 Herbert Wilcox production of the Gang Show Film. For a few gathered here tonight memories go back to the first post war shows at the Kings Theatre, Hammersmith. These were followed for many years with shows at the Golders Green Hippodrome and the Odeon Theatre, Golders Green.

Over the years the “Gang” made countless records and had their own radio and television shows. They also made many guest appearances and were invited to play in three Royal Command Performances. The only time the “Gang” played out of town was in 1957 when the show played the Birmingham Hippodrome for one week, playing twice nightly, with three shows on the Saturday, during the 1957 World Scout Jamboree. In 1973 the show moved to the State Theatre, Kilburn and in 1974, after 44 glorious years, the curtain came down on “London’s Farewell Gang Show”

The London Gang Show Fellowship was formed in 1974 with one of its objectives being “to foster the spirit of Ralph Reader’s London Gang Show” If you are interested in joining the Fellowship contact Richard Micklefield at richard@remohca.com

The archive contains photo galleries incorporating the history of The London Gang Show. 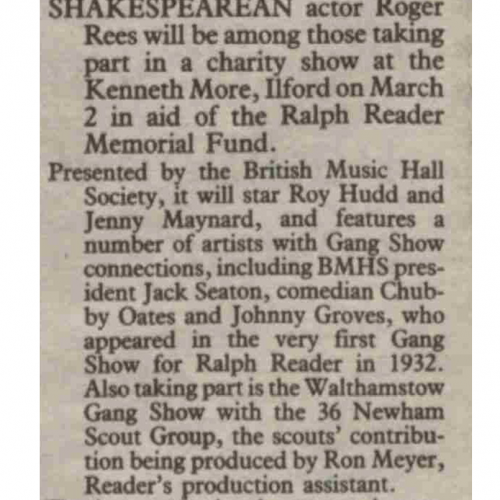 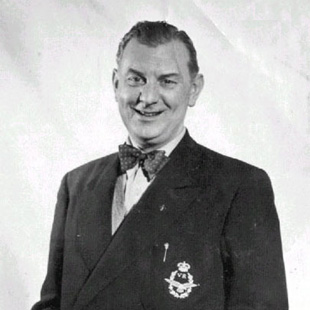 These Are The Times

“These Are The Times” is the Newsletter of the London Gang Show Fellowship which is distributed electronically and/or by post to members of the fellowship. Spring TATTS 2022 Ver1.0 WINTER…

Get in touch with the London Gang Show Fellowship by using our email: